Skip to content
Cart
Free shipping on all orders over $30*

That’s how long it's been since Littlest Prince opened its doors. It seems like I just started the company yesterday, while at the same time, it feels like I’ve been doing this forever. It’s a part of me, a part of my identity.

I get asked all the time why I decided to start this company. I mean, it is a pretty valid question - why a music performance major with no fashion or retail experience (we’re not counting the summer before my senior year of high school when I worked at the mall for 3 months) would start a clothing company, and why in just boys clothes.

And I realized recently that I’ve never actually shared much of my story before. I don’t think I’ve ever even written it down. Since we’re 7 year’s into this gig, I think it’s high time I get to it! So here goes nothing!

It all started exactly 8 years, 1 month, and 1 day ago. That’s the day that my first baby boy was born. I’ll be honest - I was terrified of having a little boy. I’m a pretty girly girl, and I only had a sister growing up, and the only boys I’d ever lived with were my dad and my husband, so this was completely new territory for me. What do you even do with boys? But that day, I fell massively in love with this absolutely perfect little boy, fresh from heaven.

I like to think I got the hang of the new mom thing pretty quickly over those first few months. Or, if I didn’t, I’ve conveniently blocked those memories. Besides, having one baby is nothing like having multiple little ones, so comparing what I remember of those first months to the chaos of my life now, it all seems so peaceful and perfect. 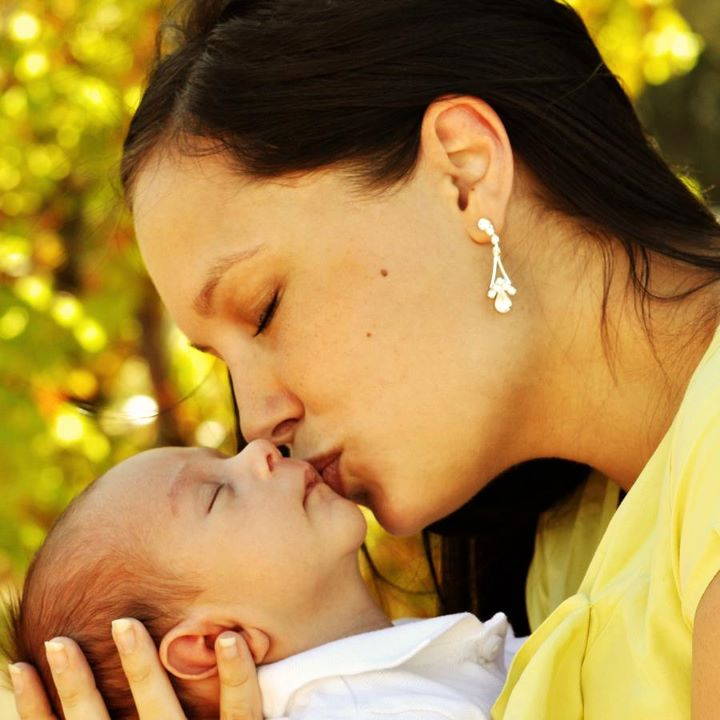 Example: nursing. When you have just one baby, nursing is this beautiful, serene time where you can just snuggle endlessly, staring lovingingly into one another’s eyes, or maybe - gasp! - use the time to read a book. And that’s what I did. I read. A LOT. (My baby loooooooved to eat all. the. time.)

I burned through so many books in those first few months that I started running out of things to read. So one day, when I was particularly desperate, I looked through my husband’s school books and found one that looked interesting. It was called Mountains Beyond Mountains, by Tracy Kidder. It ended up being one of the more fascinating books I’ve read, telling the story of Dr. Paul Farmer, a world-renowned infectious disease specialist who sought to change the world. He was so highly sought after that for one month out of the year, he would give lectures to other doctors in the US and earn enough money to spend the other 11 months operating free clinics in Haiti and other impoverished countries, saving the lives of countless individuals who would have otherwise had no access to modern medicine.

The book was beautiful, and I was inspired. I remember reading it and feeling the call to do something with my life as well. To make a difference somewhere. And then I peeked over the edge of the book and saw my tiny baby snuggling in my arms, and I was conflicted. I couldn’t pack up my life and travel the world performing amazing acts of service. First of all, I wasn’t qualified to do much of anything, and second, I had this baby now that relied on me for everything. I couldn’t leave him. Fine, then I would give money to people who could do those things, and empower them to make a greater impact. But wait, I didn’t have money either. I was dejected, so I buried those aspirations in a corner of my mind and tried to forget about them.

Around the same time, I had another (completely unrelated) experience. I walked into Target to grab a couple of items and passed by the baby clothes section. Right out front I saw a display full of the tiniest, most beautiful Christmas dresses for baby girls. My mind was flooded with memories of getting a new Christmas dress every year and how much I looked forward to those dresses. And I realized that now I was the mom, and I could carry on the tradition with my own kids. It was like a rite of passage that I never even realized I would have. So I immediately looked for the boys section…and found nothing. There was an entire rack of gorgeous dresses for baby girls, and nothing for boys. I looked, and looked, and looked, and finally found one little corner of a rack that had some “formal” baby boys apparel, except they were all covered in pictures of reindeer or elves or trains. Nothing that pulled at your heart strings like those little dresses. 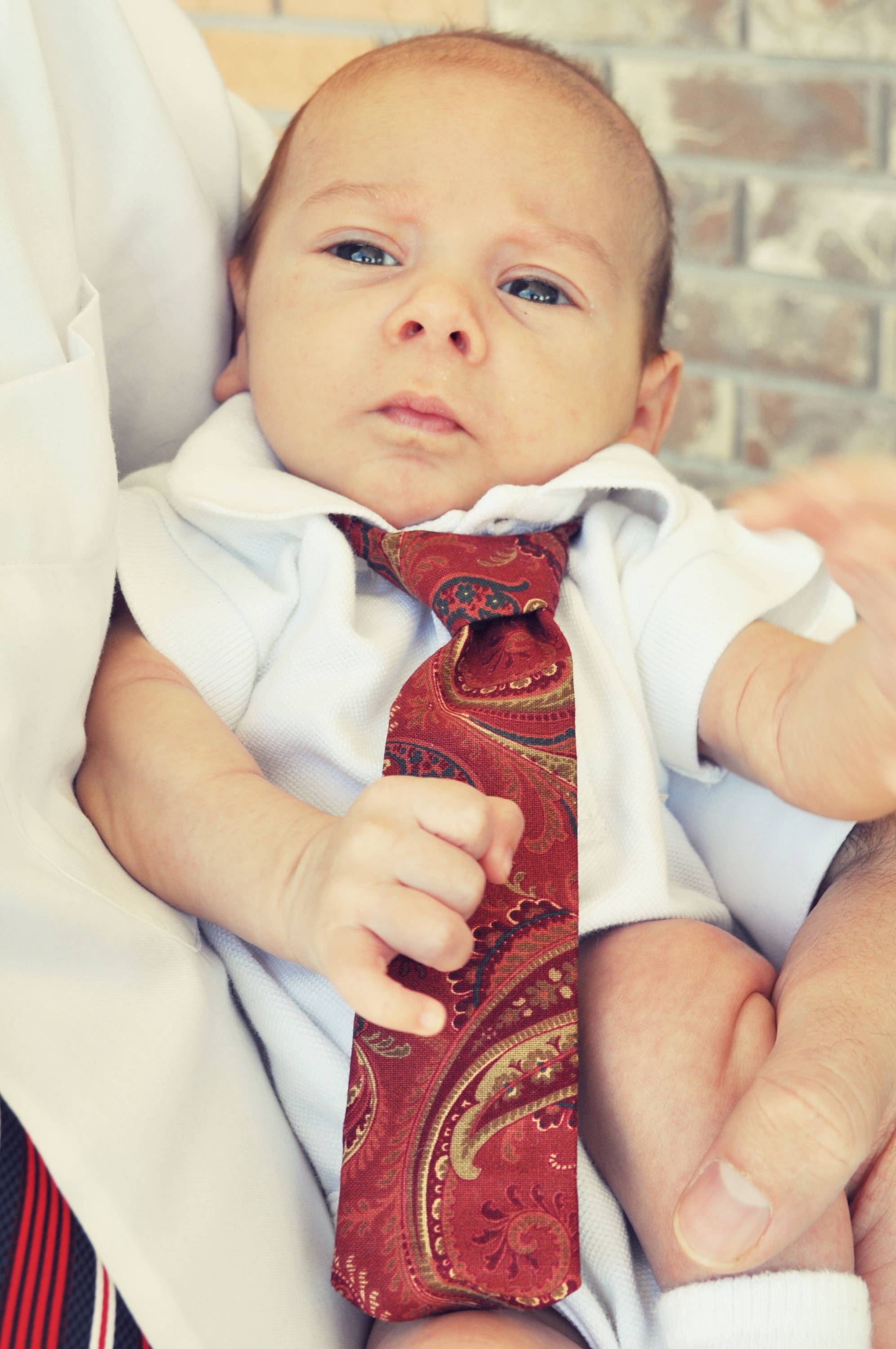 I resolved then to find the perfect outfit for my little guy. I searched and searched, and came up empty handed. So I began making the clothes myself. I found a tutorial online for sewing little ties, and styled them with the closest thing I could find to a dress shirt - a little white polo bodysuit. I started making these little ties for him out of every scrap of fabric I could find that was big enough, and I dressed him in them constantly. Everywhere I went, I would get compliments, and people would ask me if I sold them.

I decided that I would open an Etsy shop with these little baby ties. I went out and bought several yards of fabric in various colors, and set to work making sample ties out of each of the colors so I could photograph them and list them online. Except the baby was cranky from going shopping, so I would just go to bed and then wake up early while he was still asleep and sew the ties then. But then he was up all night long and I couldn’t get up early, so then I would just sew them while he took his nap later. But then he decided that even though he was only a few months old and needed multiple naps during the day, he wasn’t going to sleep more than 15 minutes at a time, and only if I was holding hime. This process repeated for several days, until I just gave up on the idea. There was no way that I could have a business sewing items when my baby wouldn’t even cooperate enough to just make the samples.

So once again, I buried the idea in a corner of my mind and tried to forget about it.

Shortly after that, my maternity leave ended and I had to go back to work. My job was in a call center. If I disliked my job before going on maternity leave, I loathed it when I got back. A lot had changed during those months I was out, and I came back to a new work schedule and new manager, and I’m pretty sure they didn’t think I would even come back from leave, because they seemed to not know what to do with me. They gave me a list of about 200 phone numbers to call, but they were all “cold leads” and I never got anyone to answer the phone. I would literally call through my entire list 2-3 times per day, and never speak to anyone. And on top of that, I had to be away from my baby.

Knowing how miserable I was, my husband would text me “deep questions” throughout the day, something I would have to think about so that I wouldn’t be thinking about how much I hated my job.

To be honest, my first thoughts were about getting a new wardrobe and traveling the world. But this triggered the concept of a) my post baby body wasn’t worthy of a new wardrobe yet, so why waste the money on that and b) it would be virtually impossible to travel the world with a 4 month old baby in tow. And I’m just too logical - why bother thinking about spending $50,000 if you couldn’t actually do the things you are thinking about?

And that brought up those memories of the ideas of traveling the world helping people, which of course I couldn’t do either, and I would be stuck in this dumb job forever and never do anything good with my life and everything was just…stupid.

What if I took the $50,000, and started my clothing business the right way, where I had manufacturers make everything for me, and then I just marketed it online? What if I could really do this and create a brand that was just for boys - a brand that bridged the gap for all those missing racks of clothes at the store that would allow little boys to look good too? And then what if I took the money I made and gave it to those amazing doctors who could travel the world helping people? Now, this was an idea worth thinking about!

This was something I could think about all day. Something I could really get motivated about. It was like my mind opened up a floodgate, and all of these ideas just poured in. My heart was pounding, and my fingers and toes were tingling with excitement. I knew nothing about fashion or retail or e-commerce, but somehow, deep inside, I knew.

I texted my husband back with my idea. He later told me that he was expecting me to talk about the clothes and the vacations, and was very surprised by my answer. And I was equally surprised when he wrote back with “well, we don’t have $50,000, but let’s see what we can come up with to make your plan work!”

And the rest, as they say, is history.

Want to know more about Littlest Prince and what we're up to now? Get to know our brand even more when you click here or meet the whole team over here.